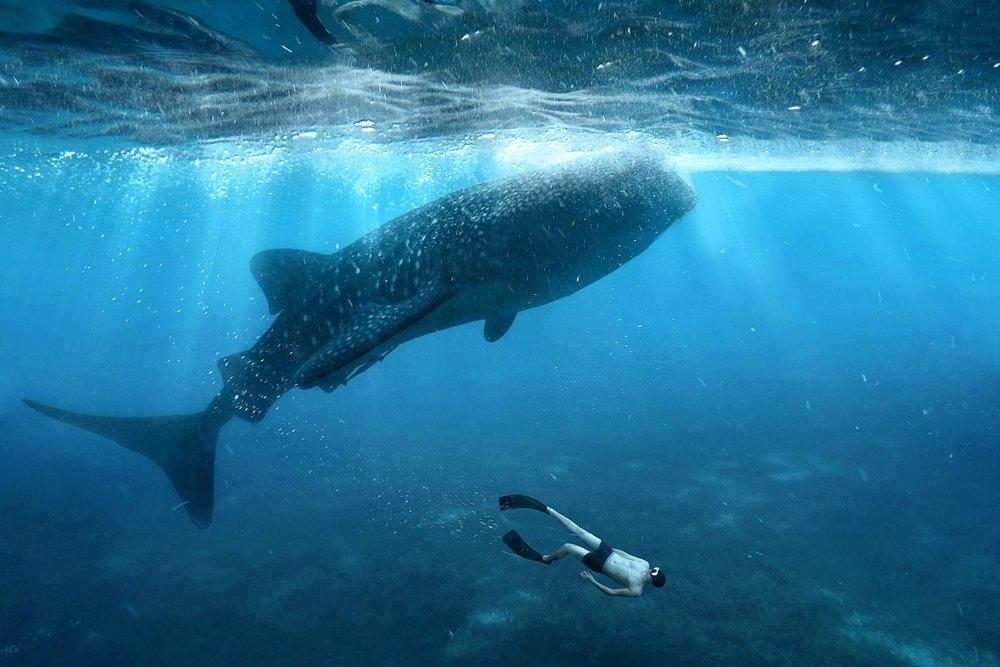 Pyramids? Forget ‘em! Eiffel Tower? Who needs it? Statue of Liberty? Just a woman in a dress.

If you really want that unique, once in a lifetime experience Why Not Bus has the just thing for you – a swim with whale sharks in Exmouth.

Truly one of the world’s most unforgettable adventure experiences, a swim with these rare and ancient giants is something you’ll remember long after you’ve left W.A..

Okay – we know what you’re thinking. The word ‘Shark’ and the phrase ‘Me Swim With’ should never be used in the same sentence.

And you’re right. Thanks largely to a rubber Great White and Steven Spielberg, sharks have a pretty bad reputation. Hell, even the mention of world’s most feared fish evokes images of large teeth and foamy water.

So of course the idea of putting on boardies and getting next to one is enough to make anyone break into a sweat.

But don’t believe the hype!

While there are a few bad eggs out there, Whale Sharks are definitely not one of them. In fact as far as sharks go these beautiful and prehistoric giants are more like the big loveable grandpa of the family.

We say grandpa because these slow moving behemoths have been around for a whopping 16 million years. Even more impressive? They hold the title of ‘World’s Largest Fish’ (no, a whale’s not a fish) making them one of the most rare and majestic animals on the globe.

Of course while they are rare, they’re definitely hard to miss – in fact the average Whale Shark is over 40 feet long and weighs an impressive 19,000 kgs!

So you can see, when we say Giant, we’re not joking…

But despite their mammoth size, unbelievably they are actually no threat to humans. In fact sometimes these guys even like to interact with swimmers; diving and turning without ever posing a threat to them.

Which is why a Whale Shark swim in Exmouth is such an incredible adventure – you’re actually getting to play around with a gigantic, moving piece of history!

Think it couldn’t get any better? There’s more!

The place these guys live is almost as amazing as they are. Imagine a turquoise blue sea that stretches out for miles, filled with some of the most amazing marine life on the planet. Well that’s Ningaloo Reef in Exmouth.

In fact the area is so culturally and environmentally significant (not to mention beautiful) that it’s been listed as a World Heritage Site.

What To Bring To Swim With Whale Sharks In Exmouth?

Well before you dive in head first, it’s always best to know how to prepare. While Why Not Bus offers a range of swimming and snorkeling equipment, you’ll also be wanting to bring along:

At Why Not Bus we’re stoked to be able to bring you the opportunity to snorkel and swim with whale sharks in Exmouth. It’s an experience we love and know you will too.

All tours are done under the supervision of a team that have been running these tours for years. So if you have any questions before or during your experience with these majestic creatures you can rest assured that a qualified guide will always be within arms reach.

And it’s not just Whale Sharks! While on the tour there’s a huge chance you’ll encounter some of the vast range of other diverse marine life that call Ningaloo Reef home. Because we take our time in this region on our Perth to Exmouth tour we’ve seen everything – from dolphins and turtles to manta rays and exotic tropical fish.

All this sounding like you? For the ultimate experience while you swim with whale sharks in Exmouth get in contact with the guys. We know how to make it truly unforgettable.